“The idea of a virtual reality system, which wouldn’t require cumbersome equipment and could be linked to any analysis software, intrigued me,” says Alfred M. Solish, MD, from Southern California Glaucoma Consultants in Pasadena, California. Dr. Solish is currently undertaking a clinical study of the VF2000 device. 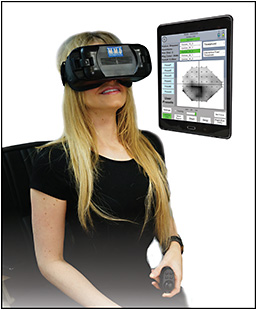 Dr. Solish says he has reaped many benefits from using the PalmScan. “It doesn’t require dedicated space, has data available for custom analysis, and allows us to share patient data between physicians as well as use our own computer and printer,” he says. “Compensating for refractive errors without complicated hardware is exciting and should lead to fewer errors.”

A remote telemedicine component allows physicians to access the captured visual from any location on a secure web portal, says Rafi Israel, MD, medical director for Micro Medical Devices. In addition, “An investment in a VF2000 device is only a fraction of the cost of traditional systems,” Dr. Israel says. Physicians can also capture revenue by screening patients who aren’t able to easily come to an office.

The VF2000 is the first visual field system that allows patients to perform the test at home, providing physicians with immediate access to results. Patients with disabilities can easily be tested, and the physician will qualify for the Americans with Disabilities Act tax credit.

Patients can take the test in any orientation, even while laying down. The VF2000 interactive fast threshold test can perform a 24-2 visual field test in a normal subject in as little as 2.25 minutes and in patients with severe defects in less than 6.5 minutes. Also, unlike other devices that require a dark room, the system can be used in nearly any setting and lighting condition.

The analyzer has 4 main components — a virtual reality headset, a controller tablet, a patient feedback clicker, and a secure web-based portal to access records. The patient wears the headset while the operator programs the system and monitors the progression of the test by using the controller tablet.

“The test is administered to each eye individually, so there’s no need for occluding the untested eye,” Dr. Israel says. Patient are instructed to keep looking at a central fixation light and press the clicker when they see any stimuli on the screen.

“False positive, false negative, and fixation losses are recorded during the test and used as a measure of test reliability,” Dr. Israel says. Gaze tracking is an optional feature. When activated, it monitors fixation. When it’s not activated, fixation is monitored passively through blind-spot monitoring.

While the patient is taking the test, the operator can actively monitor the testing progress on the controller application. After saving the test, the report is displayed and a PDF report is uploaded to the secured cloud portal. “This portal provides secure access to generated reports for each office and simplifies the transfer of reports into other electronic medical record software,” Dr. Israel says. GP